Gilbert is a small town compared to its neighbor Phoenix, and yet it has its share of car accidents that can wreak havoc and pain on its residents. If you have ever been in a Gilbert car accident, you know exactly what this means. If any personal injuries are sustained from the accident, then you will likely need the assistance of an experienced car accident and personal injury attorney in Gilbert, Arizona. A car accident lawyer Gilbert Arizona can help you through the process to uphold and protect your rights against an at-fault driver.

How many accidents happen in Gilbert, AZ?

According to Arizona Department of Transportation, Gilbert ranks in the middle of its fellow cities throughout Maricopa County in Arizona, and was home to more than 3 percent of all accidents throughout the county, as seen in the below table. 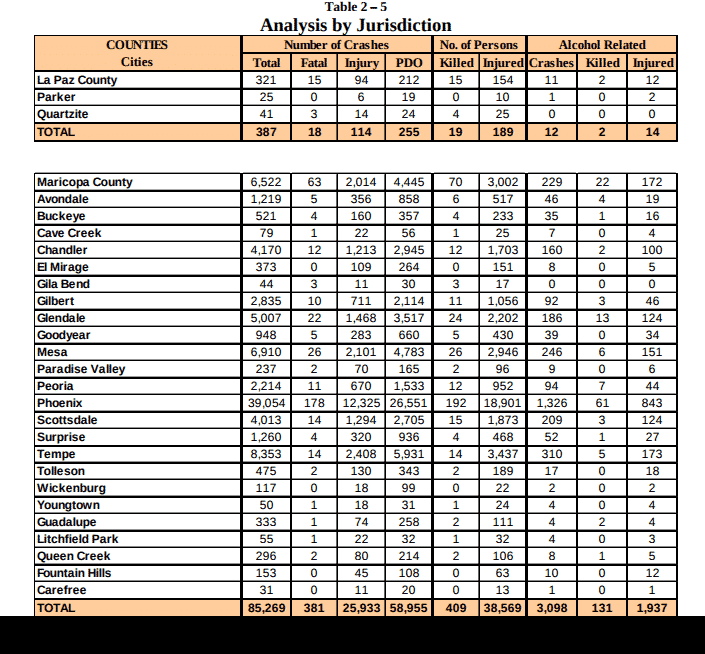 Maricopa County, overwhelmingly has more car accidents than any other county in Arizona. In fact, it is home to almost 75 percent (73.12) of all crashing in the state of Arizona.

If you’ve been involved in a car accident in Gilbert, Arizona, there is a 25 percent chance a personal injury was involved. You know that a car accident with a personal injury (or fatality) can be a scary, depressing and confusing. If your accident was caused by the negligence of another driver or entity, then you need to contact an attorney. An Arizona attorney will be able to identify the cause of the accident and then, once known, point the finger at the responsible party in order to help you recover the compensation you deserve.

What are some of the common causes of accidents in Arizona?

Car accidents are caused by numerous things. Clumped together, there are three primary causes of accidents: (1) human error; (2) mechanical error/product malfunction; and (3) environmental. The most common cause of the three by far (more than 90 percent) is human error. If it’s a mechanical error, then the manufacturer or supplier may be liable. If it’s an environmental cause, then either mother nature or possibly a government entity is responsible.

Human error can be broken down into three categories in Arizona: (1) driver violations; (2) driver physical condition; and (3) distracted driving behavior. The top causes of accidents in Arizona according to these human error categories and the statistics associated with them are documented in the below tables. 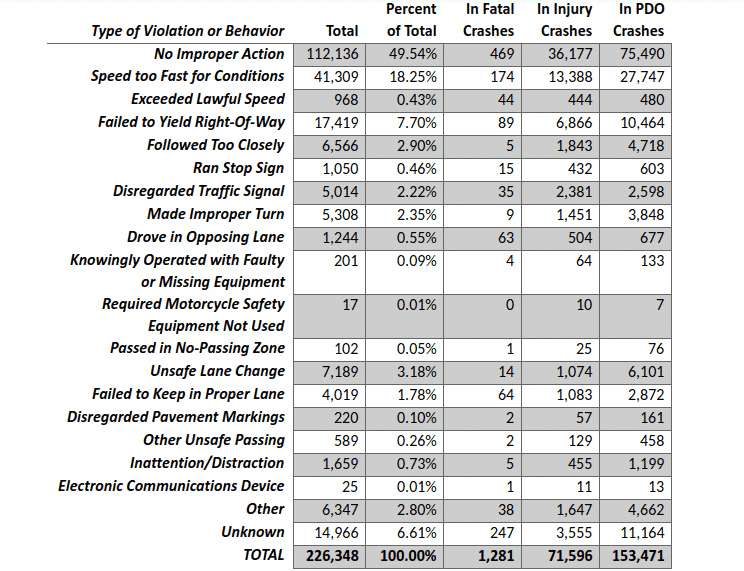 Out of 226,348 drivers in Arizona who were involved in an accident in 2015, 51.46 percent of them crashed due to a traffic violation as outlined above.

Out of 226,348 drivers in Arizona who were involved in an accident in 2015, 11.67 percent of them crashed due to a physical condition as outlined above. 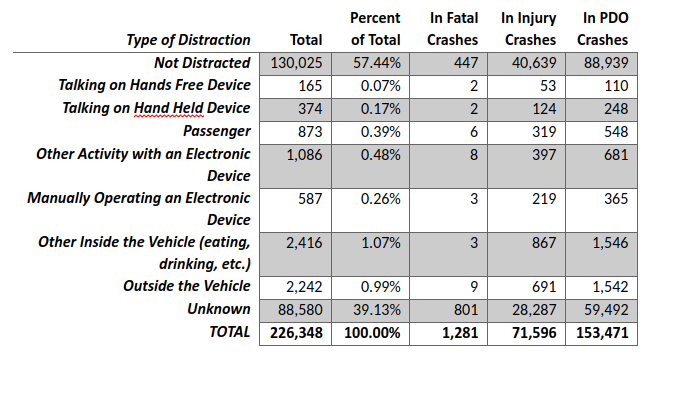 Out of 226,348 drivers in Arizona who were involved in an accident in 2015, 42.66 percent of them crashed due to a distraction as outlined above.

In all of these human errors, there is slight overlapping where a driver had made multiple errors that in effect caused the subsequent action. The below are a brief description of the 3 primary human error causes of accidents as reported in Arizona.

What are some of the most common types of car accidents in Arizona?

In Arizona, one person is injured every 9.82 minutes due to car accidents. The most common car accidents include the following:

Of all the automobile accidents in Arizona in 2015, 16.35 percent of them did not involve a collision with another car or object. The following is the statistical breakdown of multi-vehicle collisions in Arizona from 2015.

Angle Collisions These collisions occur when a driver moves into another lane and does not see another car in that lane. The most dangerous angle collisions are when they happen with trucks, especially semi-trucks who have serious blind spots.

Left Turn Collisions These collisions happen when drivers attempt to make a left turn to cross over onto a perpendicular street. Drivers may be distracted or attempting to make a green light and not see oncoming vehicles that T-bone them, or, alternatively, do not go fast enough into the lane and the oncoming vehicle rear-ends them.

Rear-End Collisions Many drivers fail to assess the timing they need to brake before they collide into another car. These collisions often happen during rush hours or other times that cars must come to a halt quickly and without much advance warning, or else they happen at traffic lights when a car thinks he can make it but the car in front stops at the yellow traffic signal, or some other similar situation. These collisions have the potential to be serious or mild, depending on the speed and circumstances.

Sideswipe/T-Bone Collisions Sideswipes, also known as T-bone collisions, are one of the most dangerous types of car crashes. The Insurance Institute for Highway Safety suggests that sideswipes account for 25 percent of car accident fatalities in the U.S. while in the Arizona they account for just over 15 percent of all auto collisions with an even smaller percentage resulting in fatalities. These types of accidents lead to more chances of head trauma and spinal injuries. Sideswipes result from drivers running a red light or making improper turns.

What is my responsibility in a car accident in Gilbert AZ?

If you’ve been involved in an auto accident in Arizona, then it is critical to know who was at fault, and if you contributed in any way, shape or form, then any compensation to you will be reduced by the percentage of your liability. Arizona is a pure comparative negligence state, which means anyone can sue an at-fault driver regardless of how much or how little that person was also at fault. If you have damages that are valued at $10,000, and you were 75 percent at fault, you can still claim the other 25 percent from the other at-fault driver. In doing so, you would receive $2,500 in compensation.

Because of the pure comparative negligence doctrine in Arizona, the claims process (and possible the lawsuit process) can become very technical and require expert testimony and analysis. Your attorney will know who to hire and for what purpose so that you can be assured you will receive the compensation that is fair and just for your unique circumstances.

Who do I contact if I need a lawyer for a car accident in Gilbert, AZ?

Nathaniel Preston is a compassionate car accident and personal injury attorney in Gilbert, AZ. He understands how traumatic a car accident and subsequent personal injuries can be. If you have been in a car accident and have possibly been injured due to the negligence or carelessness of another person or entity, contact Nathaniel Preston today to discuss your case. He is aggressive. He is compassionate. He knows the law. He gets results. He offers legal services in Gilbert, Arizona, and for the greater Phoenix area community.

GET YOUR
CASE STARTED

DISCLAIMER: The materials contained in this website are for informational purposes and are not to be considered as advertising or legal advice. This information is not intended to create, and receipt of it does not constitute or create, an attorney-client relationship between this firm and/or any lawyer in this firm with any reader or recipient of this information. Internet subscribers and online readers should not act upon this information without seeking professional counsel. Do not send us confidential information until you speak with us and get authorization to do so. Any reference or link to a third party found on this website is not an express or implied endorsement by us to that third party or the information provided.
© 2022 Warnock MacKinlay Law, PLLC All rights Reserved.
Privacy Policy